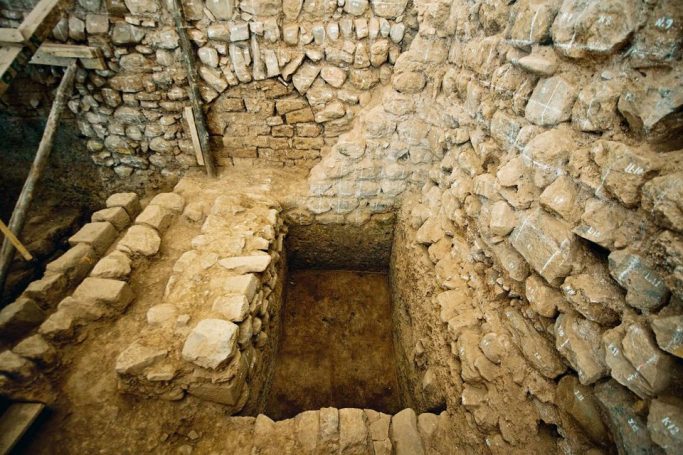 As you enter the amber-hued lobby of the JW Marriott El Convento Cusco, you’re greeted by a friendly, bilingual staff for sure. But it’s the sparkling crystals which dangle behind the reception desk that set the tone. The stunning piece of décor, composed of 6,000 Swarovski crystals, was created in homage to the Incan sun god Inti.

The crystal sun could just as well be a tribute to the Gods of Pampering who have decreed that you shall check-in to live piano music while relaxing in front of the living room fireplace, and warming up further with a cup of coca tea. The tea, of course, helps acclimate you to the nearly 12,000-foot Andean elevation, as will the oxygen pumped into the 153 rooms that keeps you breathing comfy.

That sort of refinement is to be expected, but the idea of a luxury hotel that doubles as a museum is surely new. Following strict Ministry of Culture guidelines, the two-year-old JW Marriott Cusco was built right over preserved Incan ruins.

More precisely, the hotel was built around the courtyard of an Augustinian cloister (the Swarovski reception area was the chapel) that was itself built on Incan foundations, and abandoned following Simón Bolívar’s expulsion of the order from Peru. After surviving centuries’ worth of earthquakes and damage in 19th century coup attempts, the cloister had last been a chocolate factory and bakery in the 1970’s until falling into total ruin.

Apart from being a cultural rescue project to the tune of $56 million, the JW provided hundreds of local jobs over its over its six years in the making. With all those treasures of Peruvian history underfoot, construction required fifteen architects and eighteen engineers, as well as teams of restorers, curators, and even a dentist for analysis of skeletal remains. Not only were the crumbling cloister arches saved, but original, tightly-fitted Incan walls now serve as the window view for many of the rooms (the rooms themselves are designed in classic Incan brown tones).

Out of the hotel’s fifteen-thousand-square-foot size, a full thousand square feet are devoted to gallery space with artifacts that date mostly from the Killke culture that began around 800 AD and predates the Inca. Guests are offered a daily thirty-minute guided tour that takes in everything from enormous foundations to ceramic shards. The complete story is all right here in the property’s very own lushly photographed coffee table book (editing, production and photography by Beatrice Velarde).

In those moments when you wish to just luxuriate rather than culturate, the underground spa has a full treatment menu. When I was a guest of the hotel, I wondered if my masseuse had shaken a rattle as she began for auspicious reasons. I never did ask her, but since the lavender oil massage she administered was nicely vigorous, I didn't argue with her methods.

Before I had even gotten to the chicken soup with rice at the hotel’s Qespi Bar lunch, I had already stuffed myself with their home-made breads, with creamy huancaína, yellow pepper and chile dipping sauces. In the restaurant Pirqa, which faces the courtyard and whose stone walls are part of the original cloister, the lomo saltado steak cooked with beer was the spiciest I had in Cusco.

On the corner across from the JW’s main entrance, evidence can be found that the hotel’s presence is resurrecting the block. The two-year old Museo del Pisco isn’t a museum in the English sense of the word, but a mellow bar whose walls exhibit step-by-step illustrations of the distillation process and show the history behind the biting grape brandy. While my pals were being served fruity pisco sour concoctions, my favorite discovery was drinking the suave Mosto Verde pisco style straight.

A ten-minute walk away, the decade-old Museo de Arte Precolombino, MAP, is the city’s fine pre-Columbian museum with an extensive collection of artifacts from dozens of Andean cultures and periods. The MAP Café is not some museum chow house, but rather a small fine dining restaurant inside a little modernist glass hut that glows by candlelight in the courtyard. Among the many culinary discoveries we made there were an appetizer of solterito greens that came from the restaurant’s Sacred Valley farm; a dish of adobo de cerdo (marinated pork) that had been slow-cooked for 18 hours; and a dessert mousse called besos de lúcuma which was made from a Peruvian fruit rendered into five different textures from crunchy to creamy. My new-found appreciation for Mosto Verde led me to the Viejo Tonel pisco label, whose estate I now vow to visit in the coastal Ica Region.

The JW Marriott Cusco is about a two-minute walk at most from the Plaza de Armas, the center of the Incan capital that has been dominated since the Spanish era by both a cathedral and a church filled with spectacular religious art. The plaza is the very place in which Pizarro finally, and brutally of course, subjugated the Inca Empire for good. What a thrill though today to sleep literally steps away from the hearthstone of a rich living culture and discover its past not completely buried, but finally celebrated. To stay at the JW Marriott Cusco is to get a primer on Incan culture well before you even set out for the Sacred Valley and Machu Picchu.

Looking for Pisco In Your City?

Have a Question About Our Pisco?